Detectors in radiation measurement technology are available for alpha, beta and gamma radiation as well as for the detection of neutrons. Furthermore it has to be distinguishing between detectors which only count events and detectors which allow spectrometric measurements.The counter detectors include, for example, Geiger counter tubes and He-3 neutron detectors.

Although spectrometric detectors are also available for alpha and beta radiation, the mostly important detectors for nuclide characterization and for use in conjunction with the MCAs are spectrometric gamma detectors. These detectors can be characterized by their energy resolution and sensitivity.

We supply detectors for our measuring systems from manufacturers with many years of experience in the field of detector technology, such as the companies Ritec, Amcrys-H, YaFi, BSI and VacuTec.

In principle, consist of a diode, operated in the reverse direction and provided with a large-volume barrier layer which is read out with a charge-sensitive preamplifier.

Germanium detectors (HPGe) have the best possible energy resolution but they need to be cooled by liquid Nitrogen and it’s quite effortful to put them in operation and nevertheless they are quite expensive. Germanium detectors are typically available with sensitivities between medium-sized NaI detectors and large CdZnTe detectors.

Cadmium Zinc Telluride detectors (CdZnTe or CZT detectors) also belong to the semiconductor detectors but operate at room temperature. From the resolution, CZT detectors are significantly worse than nitrogen-cooled germanium detectors, but significantly better than the best scintillation detectors.

Typically for CZT is that only relatively small detector sizes are available, therefore the general sensitivity is quite low.

However, this can be an advantage if highly radioactive objects have to be measured or a high spatial resolution is required.

There are CZT detectors in the versions planar and semi-spherical. Planar detectors are good for energies <100 keV, semispherical detectors have well-evaluable spectra up to 2MeV.

This kind of detectors consisting mostly salt crystals which emit light flashes during the absorption of a gamma quant. These light flashes will be collected by a photo multiplier, or in some cases, with a sensitive photodiode.

Scintillation detectors generally have a lower energy resolution than semiconductor detectors. Another characteristic is that the energy calibration is relatively prone to temperature fluctuations. However, they can be produced at acceptable prices with very high sensitivity.

Most widely used are scintillation detectors made of NaI (sodium iodide). They also show the best resolution among the scintillators.

Recent developments include detectors from LaCl3 (lanthanum chloride) or LaBr3 (lanthanum bromide), which have better resolution than NaI detectors up to factor 2 and are even more temperature-stable.

LaCl3 detectors have got a side effect of self-radioactivity due to the element lanthanum which makes them unsuitable for measurements at low radiation levels.

Also widely used are detectors from CsI (caesium iodide) and BGO (bismuth germanate) which have an even higher volume-specific sensitivity than NaI detectors. CsI detectors are also often offered with photodiode and are therefore quite compact.

Plastic detectors are also included in the section of scintillation detectors. Their resolution is poor and hardly useful for spectroscopy, but are the most cost-effective one`s at high sensitivity. 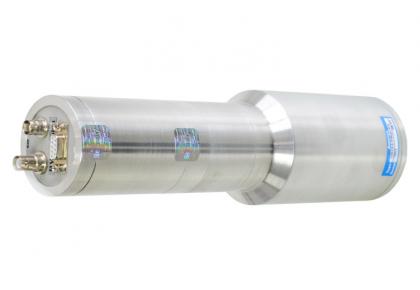 NaI detectors are probably the most widely used detectors for gamma spectroscopy. They have sufficient resolution, they are available in relatively large crystal sizes, to provide excellent sensitivity at moderate prices. The resolution of the detectors is typically 5.8% - 7% (relative half-width at 662 keV). Characteristically, the smaller size detectors mark a better resolution. 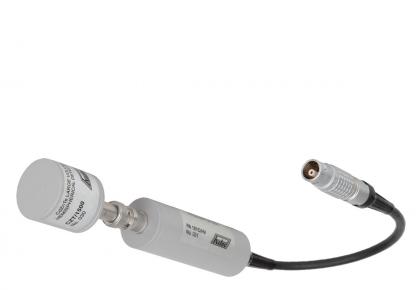 A CdZnTe detector is best used when isotope identification needs to have good spatial and spectral resolution and wherever radiation fields are quite strong. Semispherical detectors from Ritec can be used in a range up to MeV for spectroscopic purposes. Planar shaped CdZnTe detectors may have better resolution below 100keV, but above it is harder to get evaluable spectra. 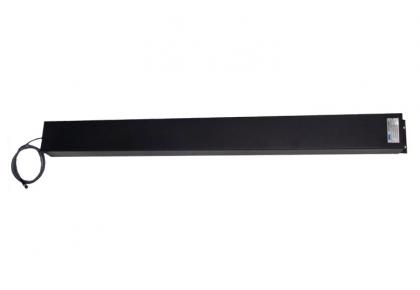 The measurement of neutrons is indirect. It is necessary to have a detector material which has a high cross-section for neutrons and, at the same time, the lowest possible cross section for gamma radiation. It is not the neutron itself but the energy of the nuclear reaction is triggered by the neutron. In addition to boron Trifluoride (BF3), Helium-3 (He-3) is the most suitable detection material. For the measurement, an available He-3 counter tube is still of little use. A high-voltage supply, a sensitive and, above all, interference resistance preamplifier and a discriminator, which generates the counting pulses, are still needed. Furthermore, it makes sense to surround the counter tube with a few centimeters of polyethylene as a moderator so that fast neutrons can be decelerated and thus measured with higher sensitivity. 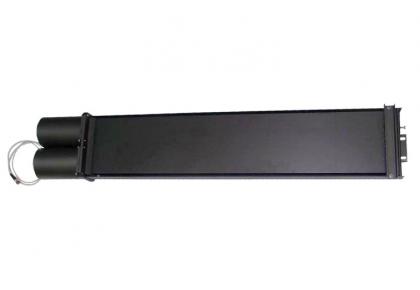 Plastic detectors are among the scintillation detectors. Gamma radiation produces light flashes, which can be detected with photomultipliers. Although they can in principle be read spectroscopically, the energy resolution is not sufficient, so that they are practically only used as photon counters. However, plastic detectors can be manufactured quite cheaply in large volumes. Its main application area is where high sensitivity is required or has to react quickly to small changes in the background radiation, for instance in the case of person monitoring at the exit of a specific control zone.